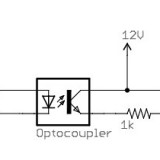 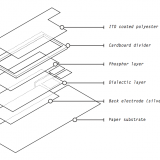 This experiment was set up following the accidental discovery of light and audio response to touch from EL during tests of reverse build EL on ephemeral materials. The EL was printed in reverse to the normal process outlined here, with the silver electrode first printed on paper, followed by the dielectric, and phosphor. When we placed a piece of ITO coated polyester over the print and applied voltage to test the print, we were surprised to find that not only would the EL illuminate in response to pressure on the ITO electrode, but also an audible tone was produced.

The sound is the result of electroacoustic transduction. By separation of the two electrodes an electromagnetic field result, vibrating the EL module in the same frequency as the alternating current from the EL driver. The driver is rated to output between 340-810Hz, which is incidentally and audible frequency range. The driver doesn’t have a fixed frequency, it’s based on the illuminated area of the EL. When the module is pressed, a larger area is illuminated resulting in reduced frequency from the driver and a lower in pitch in the audible tone.

The tone can be modulated to some extent using an audio input to control the power supply to the EL Driver as demonstrated towards the end of the video. A simple circuit can be used to impart a beat onto the tone and produce some sound effects.